Complete Drama as Angry Man Str!ps Totally N*ked in Front of People During His Trial in Court (Video)

A man has shocked people with a really bizarre display of protest in front of many people inside a court during his trial. 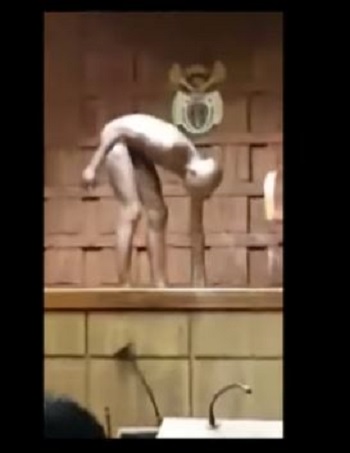 The man stripped n*ked in court
This is the moment a South African man stripped himself n*ked in front of many people inside a court.
According to Daily Sun SA, it was the man’s first court experience but he showed none of the fear first-timers usually show.
Without any shame, the awaiting trial suspect from Tshwane, South Africa, shocked the people in court by stripping n*ked!
The man, appearing in a malicious damage to property case, exposed his manhood after stripping butt n*ked.
People in the gallery were seen capturing the scene with their cellphone cameras.
In a video making the round on the internet, the n*ked man appears to be throwing what looks like documents on the floor before he places a chair on the table.
Then he jumps around on top of the documents, kicking them before sitting down on the chair comfortably as if he is the king of the court – or maybe like he is sitting on the toilet.
The video of the court stripper surfaced late yesterday.
The footage went viral on social media late on Monday afternoon and it amused many people on social media who could not hold back their comments.
Some laughed at the man while others felt sorry for him.

“He is an awaiting-trial accused. When he got into court he started undressing,” Mthunzi Mhaga, spokesman for justice and correctional services, told YOU magazine.
“The police restrained him and took him back to the holding cell.”
Watch the video below:
Posted by Team Chyson
Labels: gossip
Email ThisBlogThis!Share to TwitterShare to Facebook
at 06:06