Menu
Home » gossip » Do You Wash Raw Chicken Before You Cook It? After Reading This, You Will Never Do It Again!

Do You Wash Raw Chicken Before You Cook It? After Reading This, You Will Never Do It Again! 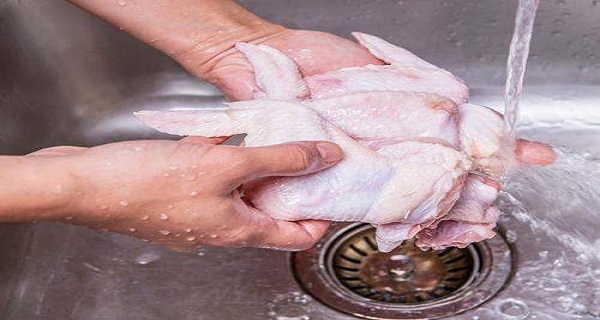 As a lot of people do, probably you are also washing raw chicken before you cook it. At first, it seems that the washing is adequate as you avoid potential contamination caused by the food.
According to Professor Jennifer Kwinlan from the Drexel University, when you buy a frozen chicken, it already has salmonella or Campylobacter or even both. These two bacteria are the main reason for food contamination.
When you wash a frozen chicken, you are probably spreading the bacteria all over the kitchen and on you as well. This is because the water you use for washing the chicken isn’t hot enough to kill germs.

Usually, people tend to wash frozen chicken in order to wash visible dirt, to clean it from potential bacteria, etc. Nonetheless, by washing the chicken, the bacteria actually spread on the sink and the surrounding area through the process of aerosolization. Therefore, there is no of exposing yourself to this risk, as the cooking at high temperature will destroy all bacteria.

Statistically speaking, in Great Britain, yearly, around 280000 people are diagnosed with contamination caused by the Campylobacter and most of the contamination occurs due to washing frozen chicken.

Posted by Team Chyson
Labels: gossip
Email ThisBlogThis!Share to TwitterShare to Facebook
at 11:17