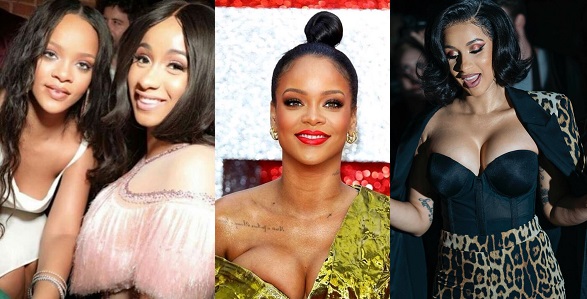 And another check shows that Rihanna is still following Nicki Minaj so it’s probable that the “Work” singer is on Nicki Minaj’s side.

week ago, Cardi B and Nicki Minaj got into it a fight while at the Harper’s Bazaar Icons party at The Plaza Hotel in New York City.

Cardi later took to Instagram to address the incident.


“I’ve let a lot of shit slide! I let you sneak diss me, I let you lie on me, I let you attempt to stop my bags, fuck up the way I eat,” Cardi wrote.
“You’ve threaten other artists in the industry, told them if they work with me you’ll stop fuckin with them!! I let you talk big shit about me!!”

TMZ reports that Cardi approached Nicki’s table “to address the lies Nicki was spreading” and was allegedly met with an elbow to the face as security attempted to halt Cardi’s advance.
Chaos then ensued with Cardi reportedly chucking her shoe. Cardi was seen leaving the party barefoot with a large lump on her forehead.

Posted by Team Chyson
Labels: global
Email ThisBlogThis!Share to TwitterShare to Facebook
at 04:17