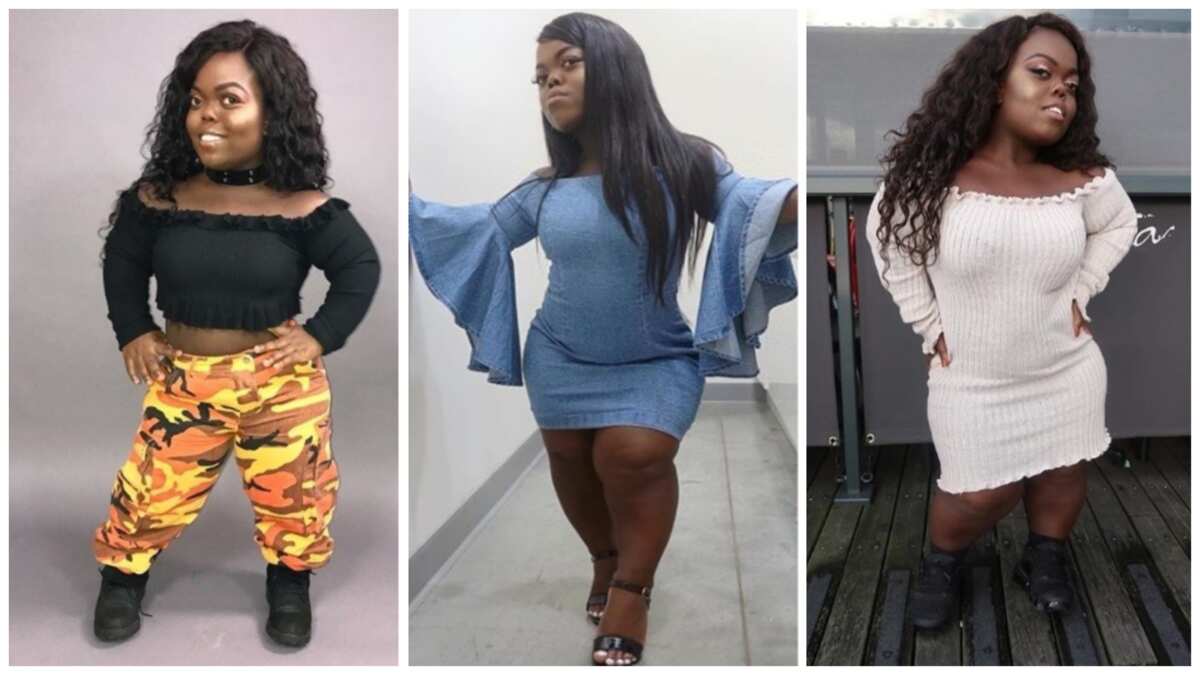 For most people suffering from dwarfism, the spotlight isn’t exactly their most preferred as their physique tends to draw a lot of unwanted attention, not all being pleasant. For this four foot lady identified as Fatima Timbo, it is entirely a different case.
Fatima has had to overcome cruel bullies to carve out a budding career as an Instagram model.
The 21-year-old, who is a Finance trainee from London, was born with achondroplasia, a bone growth condition that causes people to be short in stature with a regular-sized torso and short limbs.

After being bullied throughout high school, Fatima learned to embrace her condition and started modelling in 2017, quickly growing her social media following to 4,000.
But despite with her newfound confidence and appearing on dating show The Undateables, Fatima admits it’s hard to find a genuine man – and has to fend off men with dwarf fetishes.
‘I have to be wary of guys who just have a fetish for dwarfs because there are some guys that actually see me as something to tick off their bucket list. I would say it’s harder to find a genuine guy if you’re a little woman,’ Fatima said.
But Fatima is still remaining positive in her search for the perfect man, and even tried hit show the Undateables- despite initially rejecting the idea when she was spotted.
‘One of the producers of the show found me via Instagram and thought I would be great for the show,’ she said.

‘It came about when’I declined at first because I didn’t get past the name of the show. A few months later I reconsidered because I thought of the bigger picture of how I could inspire people and most importantly find love.
‘My time on the The Undateables was great – I had so much fun filming but was I kind of worried about how the public would perceive me,’ she said.
But Fatima has had to develop a thick skin to gain the confidence she has today, battling cruel comments from bullies as she grew up.
‘The most popular comment I’ve had is ‘midget’, which I hate because it’s a derogatory term for dwarfs or little people,’ she revealed.

‘The worst comment someone said about me was ‘if I was Fatima’s mum I would abort her because she’s a midget’. When my friend told me, I couldn’t stop crying because of how hurt that comment made me feel.’
The toughest part is the constant staring of people when I go out. It’s almost like going out in a funny costume.
‘People always react when they see me by laughing, pointing, or some people just give me a disgusted look sometimes.
‘I overcame this by simply ignoring them because I know ultimately those people don’t have any effect on my life and they can only affect me if I let them.’

And growing up as the only person in her family suffering from the condition made it harder for Fatima.
She remembered: ‘While I was growing up I remember seeing doctors quite often regarding my dwarfism. The doctor often suggested ways of helping my growth.
‘One of them was injecting into my leg every day for around five years to stimulate growth in my legs which my dad did but I don’t think that really helped.
‘As I was growing up I noticed everyone was growing taller than me and that disheartened me because I wanted to be like everyone else.
‘I’m the only one in my family who has the condition. My parents found out when my mother was six months pregnant that I’d either have Downs [Syndrome] or dwarfism. It happens to one in 30,000 births and I happened to be that one.’

However, she learned to be resilient from a young age, throwing her energy into performing to help build her confidence.
Fatima says that since performing in shows and modelling, her confidence has soared, and she no longer cares about what anyone says about her.
‘I’ve always tried embracing who I am from when I used to perform in the theatre, but I began to fully embrace and accept myself when I started modelling last year,’ she said.
‘I started getting involved in campaigns that embraced all types of people such as plus size people, people with skin conditions and really tall people.

‘From then on, I would post pictures from my shoots on my Instagram profile. Once I did that I saw how many people I was inspiring by embracing my condition and not letting my insecurities get to me.
‘I feel great now. I feel like I’ve grown more self-love in myself, as I face new challenges every day. I also I feel like my height has no limit.’

Posted by Team Chyson
Labels: gossip
Email ThisBlogThis!Share to TwitterShare to Facebook
at 09:09