Menu
Home » news » Heartbreaking: Graduate Who Died Few Days To Her Wedding Gets Buried In Her Wedding Gown (Photos) 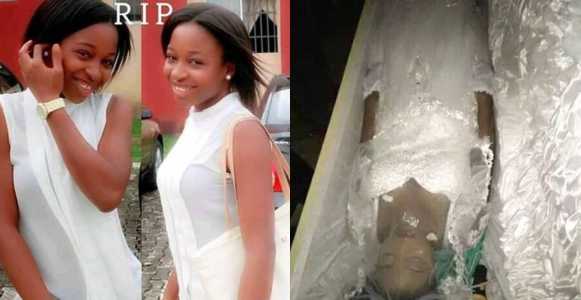 It has been reported that a fresh graduate of History and International Studies from the University of Calabar in Cross River state who was killed in a motor accident on the 28th of January, 2019, has been laid to rest.
The young lady identified as Mary Owan, died in the fatal accident just a few days to her wedding, which was slated for the 2nd of February.

Mary was buried on the same day she was supposed to have gotten married.
The accident which took her life occurred in Edor, Ikom local government area of Cross River State. She was said to be on her way to her hometown for the traditional wedding rites.
Late Owan was a niece to University of Calabar Vice Chancellor, Prof. Zana Akpagu.
See photos of the young lady’s body below:

Posted by Team Chyson
Labels: news
Email ThisBlogThis!Share to TwitterShare to Facebook
at 08:06