Pastor who claimed to have resurrected a dead man, finally speaks 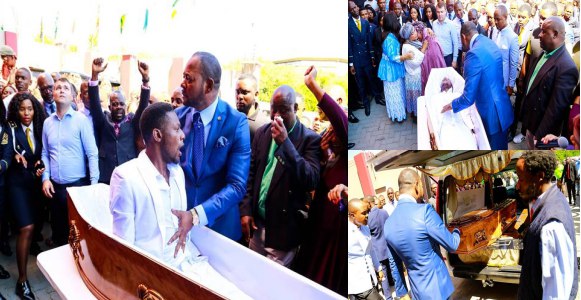 Alleluia Ministries church pastor Alph Lukau, who is said to have resurrected a man who was in a coffin at the weekend, has said the man was already alive when he arrived at the church.
Speaking to Gauteng broadcaster PowerFM’s Power Drive host Thabiso Tema on Wednesday evening, Lukau said he was busy with a sermon on Sunday when he was interrupted and told that a person in a coffin had been brought to the church.
“Before entering the premises of the church, the coffin began to shake, meaning the person was alive,” Lukau explained.
He said when they heard that the man in the coffin was alive, they began to pray for him, made him stand and ushered him inside the church.
When asked by the host why the man had been brought to the church in the first place, Lukau said: “I am not sure if I can make a statement that he was brought to me. We are the house of God and I’m just a pastor serving in the house of the Lord.”
Lukau said the man was brought to the church by his family, who believed that something would happen if he was prayed for.
He added that further questions about why the man was brought to the church would be better answered by the man’s family.
“I think that they brought the person to church because they believed that God had the ability to resurrect the person,” Lukau said.
The pastor seemed to dodge Tema’s questions on whether he had the ability and powers to bring a dead person back to life.
After repeated attempts by Tema, Lukau eventually said he had no ability, “except if God used me as an instrument”.
“I can safely say and clarify that I did not pray to resurrect the person, I don’t want to take that credit. Should God ask me to resurrect somebody and give me grace and the power, by faith I will try that,” said Lukau.
He added it was the first time there had been such a case at the church.
Earlier, the Commission for the Promotion and Protection of the Rights of Cultural, Religious and Linguistic Communities (CRL Commission) said it would summon the church to explain Sunday’s incident.
However, Lukau says there is nothing for the church to explain.

Posted by Team Chyson
Labels: news
Email ThisBlogThis!Share to TwitterShare to Facebook
at 11:23