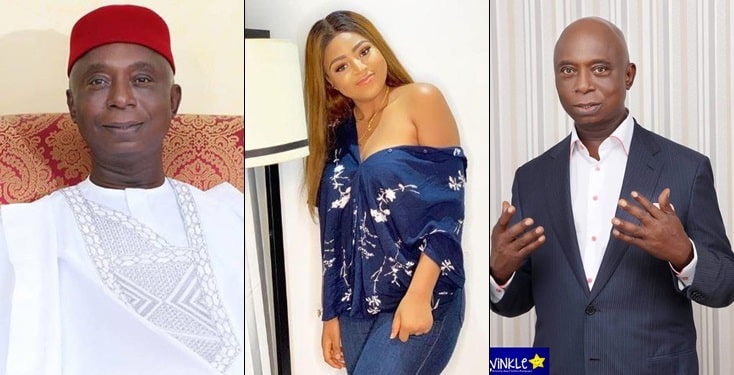 Some days back,News Broke and went viral that Nollywood actress Regina Daniels has secretly wed her alleged ‘big god’ Senator Ned Nwoko but findings reveal that the two who are definitely affectionate towards another are not married.
SDK Sources say that the actress was as shocked of the News that she got married as her online fans who bashed her ”Regina is tired of all the talks and lies concerning her..how long will she keep defending herself?even if she does,more people will still talk and those that want to believe the story will do so no matter what she says,that she why she has kept quiet..The whole drama is so confusing for her and she would rather focus on other things..”
Another source say ”Regina is actually not married and she does not think she owes anyone to explain herself when it is not true but in due time,the truth concerning this supposed marriage will be revealed….

How can someone wake up t hear they got married?was it in the dream?Doesn’t the person have photos?The truth will be out in due time……..people should think what they want,Regina is tired of it all,they have tagged her romantically to people that she doesn’t even know and it does not bother or shake her when she knows that one day,the truth will be out.”
When probed if Regina and the rumoured husband are in a relationship,the source preferred to keep mum on that and further findings reveal the affirmative..

Posted by Team Chyson
Labels: gossip
Email ThisBlogThis!Share to TwitterShare to Facebook
at 04:27