Soldier beaten to a pulp for preventing jungle justice (Photos) 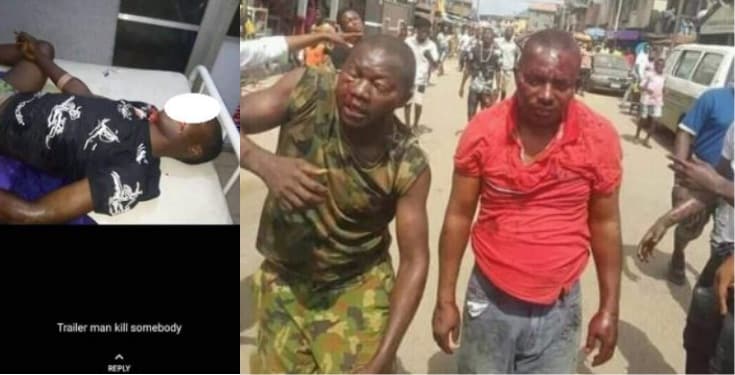 A soldier was brutally beaten by some street boys because he intervened to stop them from killing a trailer driver who accidentally killed one of them
There was commotion at Apapa boundary in Ajegunle, Lagos, on Tuesday, April 16 when a trailer driver crushed one of the street boys named Kola Mutiu, aka Black Jesus.
According to reports, Kola had gone after the trailer driver, trying to force him to pay one of the limitless dues they stand on the road to collect from drivers. While running after the driver to collect money from him, he was crushed to death by the trailer.
Kola was rushed to the hospital by other area boys and he was confirmed dead. The area boys then went after the driver with the aim of making him pay with his life. But a brave soldier stepped in to avert the jungle justice.
The area boys ended up unleashing their rage on the soldier and beat him till he was bruised and swollen. They also destroyed a military van.

Posted by Team Chyson
Labels: news
Email ThisBlogThis!Share to TwitterShare to Facebook
at 13:01