The True Story Between Ned Nwoko, Regina And I – Regina Daniel’s Former Boyfriend, Somadina Opens Up 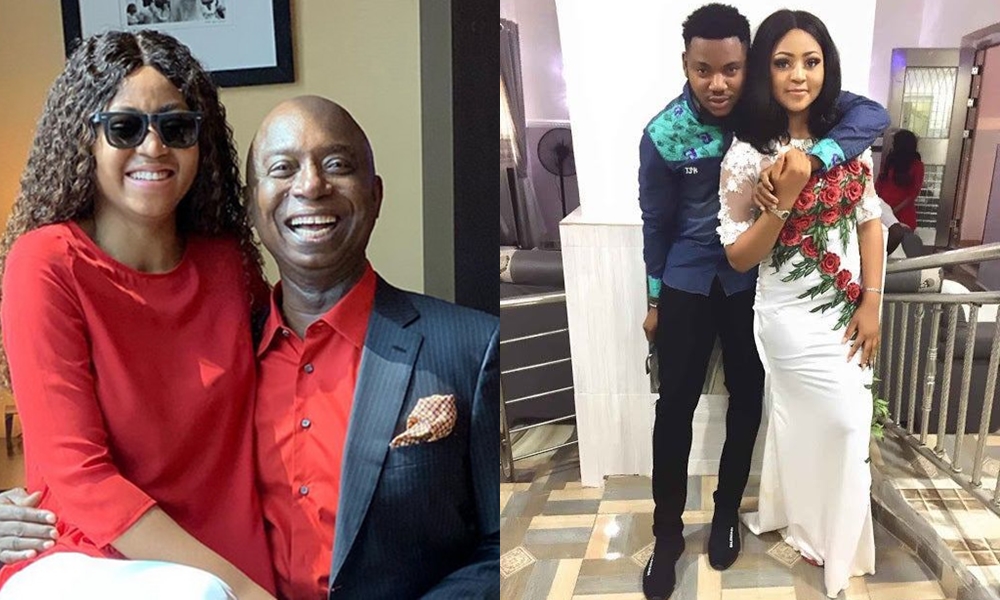 Nollywood actor, model and television presenter, Somadina Adinma, has finally opened up on his relationship with teenage actress, Regina Daniels.

Adinma, who admitted that he has found love again after Regina left to marry another man, however, revealed that his opinion doesn’t count if someone decides to marry whomever he or she desires. He also talked about other issues. Enjoy it.
Tell us a bit about yourself
My name is Somadina Adinma. I am from Anambra State. I am the last child of my family. My dad is late and I have just my mom and a sibling.

READ ALSO:  BBNaija2019: Khafi And Gedoni Caught Having S e x For The 3rd Time; Nigerians Reacts Angrily
From being a kid actor, how has the journey been?
It wasn’t easy. It was very hard. You know, at a point, I stopped acting because my mom felt that acting was taking my mind away from school. So, I stopped acting. I couldn’t get admission to higher institution, so I went to do a diploma course in Cooperative Economics and Management. After my two-year course, I gained admission to study Theatre Arts and Film at the university. I
started acting again in my 300 Level and it was very hard. Now, staging a comeback is very hard.
What’s it like combining education and acting?
It was very hard. I studied Theatre Arts and Film, so combining acting and schooling was very tough. I wasn’t getting jobs frequently and it was after my graduation that I started getting roles.
Did life as a kid actor rob you of your childhood?
No, it didn’t. Life as a kid actor didn’t take anything away from me. I had time to play with every other child in school and at any other places.
How were you discovered as a kid actor?
There was this day I came out into my street and I met some people filming. It was actually Osita Iheme and Chinedu Ikedieze (Aki and Paw Paw) doing the filming. So, I walked up to one of the cast, he was an actor too, and said I wanted to be like these ‘kids’. He looked at me and smiled. He said ‘those are not kids, they are adults, but if you are really sure you want to act, I can meet your parents to get the go
ahead’. They eventually came, but they wanted to take my brother instead of me. And I was like ‘who does that?’ Then I was very small, I was like seven or eight years old. But the edge I had over others was that I could read and understand the words, and they had to tell other kids to say ‘this and that’ before they could say so. That was how it started for me. I think my first movie was actually a scene, the tittle was ‘Charge and Bail’, and I did it with Osita Iheme.

READ ALSO: Breaking News: BBNaija Star, Teddy Proposes To Former Housemate BamBam (See Photos)
Which movie brought you back into the spotlight?
I did two movies ‘Love and Oil’ directed by Ifeogwu. It starred acts like Yul Edochie, Nuella Njubuigbo and so many others. The second was ‘Miss Teacher’, a Chika Ike’s movie, which was about child’s right. I was one of the main characters in the movie, and then ‘Mr China’s, ‘Eliza the Village Lover’ and others. Those were the movies that people saw and started calling me for jobs again.
Now that you are back, has it been easy for you?
It wasn’t easy to stage a comeback. But now that I am back as an adult actor and a graduate, I think it will be easier.
Which is your most favourite movie?
Wow, do I have a favourite movie? I think all of them are cool, but the movies that took me everywhere was the ones I did with Regina (Daniels). I think that’s ‘the woman I love’.
What kind of student were you in school?
Of course, I was like every other student. The only difference was that they treated me a bit special. But then, in Theatre Arts, everybody was a star. They knew I was an actor but everybody in my department was a star, including the lecturers.
Did you fail any course?
Yes, in my first year, I didn’t know it was all about attendance and stuff like that. I had few carryovers in my first year, but I never had any carryover again till I graduated.

READ ALSO:  Why I Married Ned Nwoko – Regina Daniel Finally Breaks Silent In New Interview ’13 Things You Don’t Know About Me” (Video)
What was your motivation?
The love of the craft was my motivation. This was something I started as a child. Then, it was like a plaything. But it started making sense for me to want to study Theatre Arts and Film in the university.
What was the chemistry like between you and Regina?
We met at a location, we were both young and we bonded. We were meant to be friends and when you are cool with the characters on set, interpretation of the story becomes normal. So, it just happened. It’s like when Genevieve (Nnaji) and Ramsey (Nouah) were doing their thing. Yeah, we were able to connect.
Looking at the whole scenario, would you say meeting Regina Daniels added a kind of vibe to your career?
Yes, it did. But I was the vibe before I met her. Then, she added more vibe and that’s it. After the movies, we became friends, colleagues and close friends.
What do you have to say about the reports that she dumped you for another man and you became angry?
No, no, no, I got angry because people were coming to say stuff they didn’t know anything about. They were trolling me. All I know is that people need to mind their business. It’s not everything you inquire about. At times, people should just be like ‘this is none of my business, let me just allow this slide’. Regina and I were very close friends. She didn’t dump me for anybody. Nobody dumped anybody. Nobody is feeling bad about anything.
What’s your take on her marriage to Ned Nwoko?
I don’t have a take on someone’s personal life. Whatever anyone has chosen to do with his or her life, that’s his or her personal life. My opinion is not even needed. My stand won’t change anything.
Many people thought that though you felt sad, you’ve moved on
But why should people feel like that. When you are not ready to marry, would you tell the other person not to marry because you are not ready? That’s wickedness. Even when you are ready, you may decide not to marry the person. I am not saying that’s the case, but Regina and I were close friends.

So, you didn’t feel bad about the whole thing?
No, not at all.
Are you in a relationship now?
Yes, I have always been in a relationship.
Who’s the lucky girl?
My mom, my brother, my friends; all these people love me and I love them too. Is that not enough?
How do you handle female fans that want to get down with you?
It’s okay to be cool with everybody, all your fans. One thing they should know is that you can’t be for everybody. You can never be for everybody. I will like to follow everybody on my Instagram, but unfortunately I can’t do so.
What’s the craziest thing a fan has done to you?
The craziest thing keeps repeating itself all the time. When they want to take pictures with me in public, and I am a very shy person. I always feel embarrassed when all these things happen but I’m getting used to it little by little.
How about remuneration? Would you say the movie industry is able to put food on your table?
Sure, it does. But you don’t have to put all your eggs in one basket. You also have to do other businesses.
Apart from acting, what other things do you do?

Posted by Team Chyson
Labels: entertainment
Email ThisBlogThis!Share to TwitterShare to Facebook
at 06:50